This weekend’s Summerhall Historical Fiction Festival seems to have been a bit of a mixed bag, success-wise. During my first visit on a sunny yet chilly Friday afternoon, there was a bit of a buzz about the place, and attendances were good, though the place was hardly crowded. By Sunday, though, I arrived for the final event to discover that the previous one had been cancelled owing to lack of sales.

It’s a shame, as the hugely affable director of the festival, Iain Gale, had clearly made great efforts to broaden the festival’s appeal and put on a varied programme. Perhaps a low profile and lack of marketing meant that few people knew it was happening*, and with tickets all between £5 and £7, it was very reasonably priced.

The final event of the festival was Andrew Greig talking about his book Fair Helen, based on the Border ballad Fair Helen of Kirkconnel Lea, accompanied by Rachel Newton playing clarsach and fiddle.

Alan Massie introduced him as “one of Scotland’s leading writers, a mountaineer, golfer, fisherman and polymath” and noted that Fair Helen has been shortlisted for the Walter Scott Prize this year. Massie praised it as a remarkable novel drawn out from such a short ballad while still being poetic and sensitive (a word that “is one of the most damning words one can use for a novel” as people will often read it in a blurb and put the book back down).

The narrator, recounting events some years later, is Harry Langton, a friend of the ballad’s “hero” Adam Fleming who helps him in his quest to rescue his love Helen from the swaggering Rob Bell. Massie said: “The question of who sees the action is important as to get a voice that rings authentically to the reader is very necessary and this narrator is absolutely convincing.” 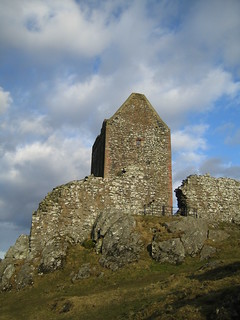 One of the main themes of the novel (and the ballads) is the level of violence in the region at that time. The Borders were infamous for the lawlessness of the Reivers, families locked in larcenous and murderous feuds for hundreds of years. Greig said he had got access to one of the pele towers and was looking across to England just a few miles away and thought how easy it would be for someone “to come here in an hour and kill you”. I didn’t catch which tower he meant, but having been to Smailholm a while back, I know exactly the feeling he got. (For a sense of scale, the border in my picture below is well below the horizon.)

In choosing his narrator, Greig said: “I remembered that I wanted to write a novel from the viewpoint of a sidekick, as it would be more interesting than following the hero’s point of view.” And cryptically added: “I was going to have to write this just for one joke.”

“The name Harry Langton came to me complete. When you get a whole name a whole biography comes with it.”

He then read a long passage from the novel, evocatively bookended by music and song from Rachel Newton. There was an immediacy to it that reminded me of the fact that the sort of people involved in such violence were little more than boys, though I have to say I didn’t get much of a sense of place or the surroundings from the extract. One of the ways the ballad is pulled out to book length is that it’s not a straightforward retelling. There are intrigues among the characters, and when Langton is set upon by the villain Rob Bell and two others, he survives, which surprises him. “Everybody is withholding information from each other.”

He also said that he quietly slipped in a certain well-known playwright, unnamed and visiting from London with his players, into the story. The ballad inspires an idea for a tragedy about a prince, and asks Langton in there are any ghosts in the story. “No, we don’t do ghosts in the Borders.” “Pity,” he replies.

The language is quite densely Scots, with other languages mixed in, which occasionally makes it tricky to follow, but it’s also far from the language of the time. “That was the most fascinating thing. Had I written it in 17th-century Scots, no-one would want to read it.”

However, he notes that at the time educated people would have known Latin, Greek, French, Italian and even Dutch, mixed in with a Scots that varied in its usage in different contexts, something that was important to him to capture. For example, he said, he uses “faither”, “father” and “da” even within the same conversation without even thinking about it.

To add to this essential inconsistency, he said: “The ballad singers don’t always stick to the song. Ballads were in flux, like Chinese whispers.”

And it is necessary in historical fiction to remember: “To the people then, then was now. They are not stupid, to them they are not in the past. To them the language sounds as normal as you do now.”

Massie noted the similarity of the times to the Wild West, although that period lasted only 30 years  while the Reivers were active for about 400 and, perhaps pointedly, observed that it was”only when the crowns were united that they put a stop to it”.

It was noted, though, that maybe a better comparison would be to warlords in countries such as Pakistan, as in the West there was less of the familial, tribal structures that pervaded the Borders.

The event closed with a recitation of Twa Corbies from Newton. It was a very interesting talk, and it’s a pity it was fairly sparsely attended, as a few more bodies might have warmed up the theatre.

All the ingredients were there for a very enjoyable and successful weekend, and I wonder if the increasing fragmentation of media into narrowcasted niches rather than a healthy national press might be a factor in the difficulty of marketing such events. Who knows? I’ll definitely be back for next year, but if I might make one suggestion it would be that a broader audience might feel more welcome if there was, well, a little less tweed.

*I’ve recently spent a lot of time compiling the details of as many literary festivals as I could find and up to two weeks ago this one hadn’t even registered on my radar.